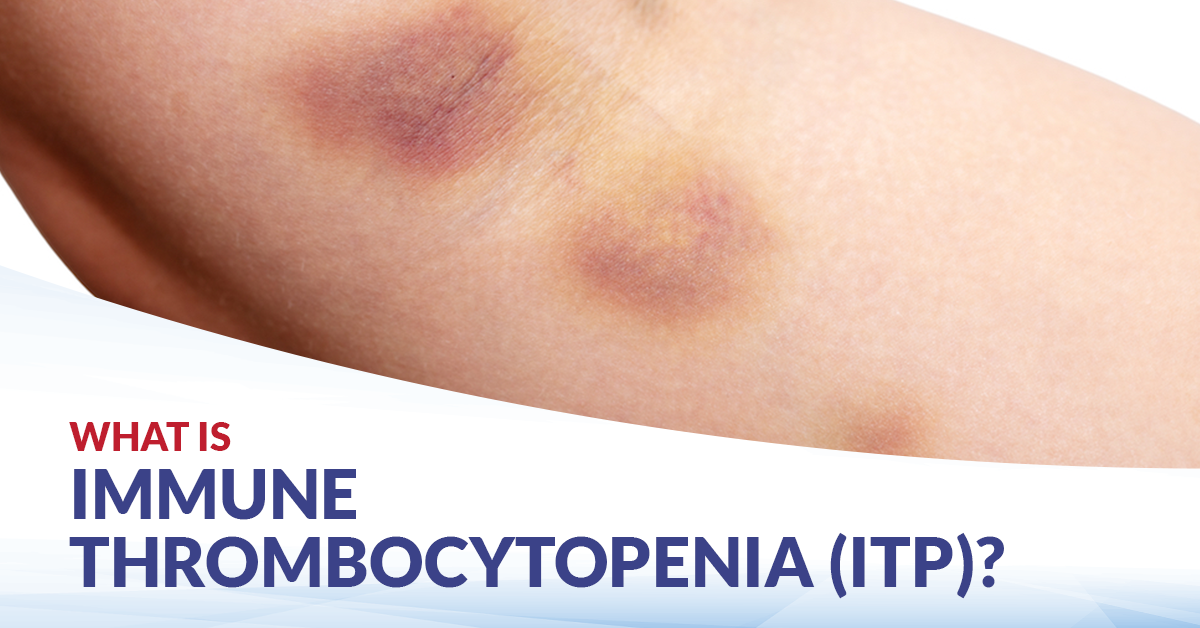 What is Immune Thrombocytopenia (ITP)?

Immune Thrombocytopenia is an autoimmune disorder that causes a low platelet count which results in abnormal bleeding and bruising.
.

There are three types of blood cells formed in the bone marrow which are red blood cells, white blood cells and platelets. Platelets are small sticky cells which circulate in the bloodstream. After an injury, platelets form the first plug that prevents excessive bleeding and bruising, and stops blood leaking from the vessels.
.
.

In healthy individuals, the normal platelet count ranges between 100 and 400 (x 109/l). A platelet count lower than 100 is called thrombocytopenia. Many patients with ITP can have a very low platelet count, sometimes in single digits.
.
.

What are the causes of ITP?

Immune Thrombocytopenia is an autoimmune disorder. It occurs when the immune system fails to recognise the platelets as the body’s healthy tissues and considers them to be harmful foreign bodies. As a result, the immune cells attack and destroy platelets resulting in a low platelet count. It can occur following a viral infection, vaccination, or certain medications. However, in most cases, the exact cause of ITP may not be ascertained.
.

How is ITP diagnosed?

ITP is usually diagnosed when a blood count shows a low platelet count despite the structure of the platelets and other blood cells looking normal under a microscope.
.

If the ITP continues, additional blood tests may be performed to rule out other abnormalities such as rare clotting and immune diseases that look similar to ITP.
.

What are the symptoms of ITP?

Patients with Immune Thrombocytopenia who have a platelet count higher than 50 may not exhibit any signs of the disease. The low platelet count is usually detected during a routine blood test in these cases.
. 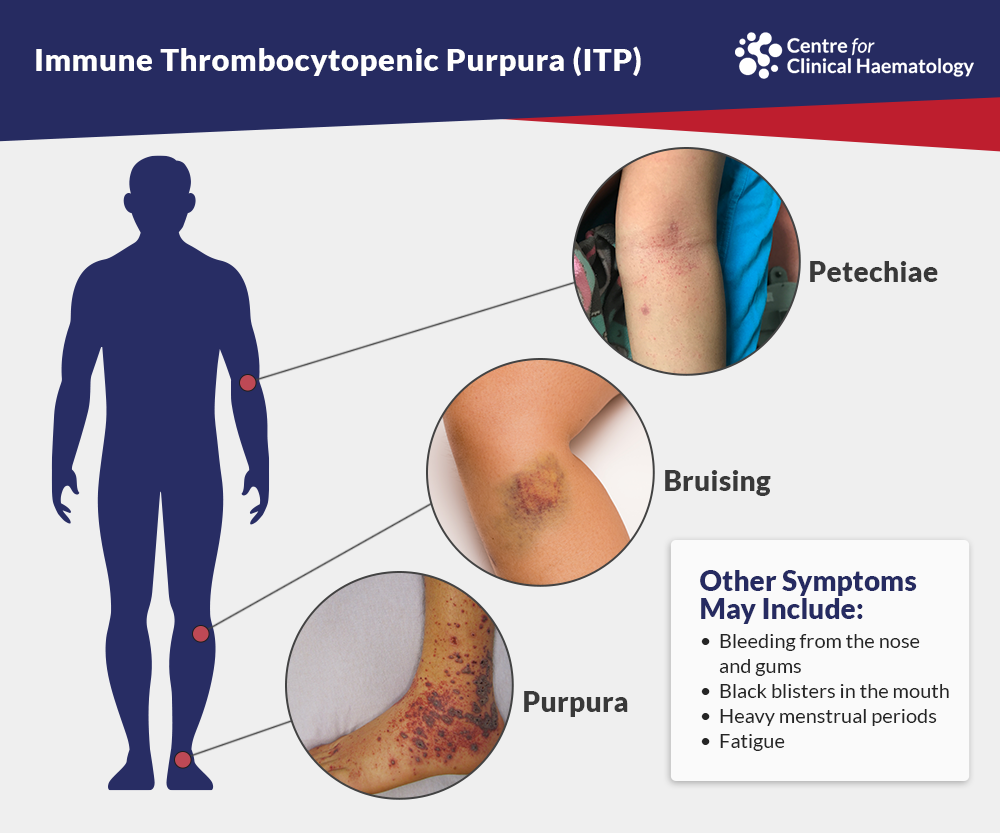 People with a very low platelet count may develop a few symptoms, such as:


Some rarer symptoms of ITP include:


How is ITP treated?

Patients with mild ITP usually do not require any active treatment. However, their platelet count should be monitored regularly.
.


Treatment of ITP is aimed at raising the platelet count and suppressing the body’s immune system to reduce platelet destruction.
.

First line treatments for ITP include steroids, such as prednisolone, and intravenous immunoglobulin (IVIG). These help by dampening down the immune response and hence prevent destruction of platelets.
.

Second-line treatments include medications such as:


Rarely, patients may be advised to have their spleen removed (splenectomy). This is rare nowadays due to the development of new treatments.
.


The use of tranexamic acid is recommended to reduce bleeding symptoms eg, after dental treatment such tooth extractions. Tranexamic acid can also be prescribed in combination with hormonal preparations to women with heavy menstrual periods.
.

Why can I not have platelet transfusions to treat my ITP?

The platelets produced by your bone marrow are normal. ITP is a result of the immune system destroying these healthy platelets. If you received transfused platelets, they would also be destroyed by your immune system within a matter of minutes or hours. However, they can be used in emergencies if there is severe bleeding as they can help to form a clot.
.

What do I need to do if I am having a procedure or surgery?

Inform our doctor if you are planning to undergo any procedure such as a biopsy, dental extraction, or surgery. Our doctor would advise you to have a blood test to check your platelet count and recommend necessary treatments to minimise the risk of bleeding during and after the planned procedure.
..

Do I need to avoid any over-the-counter preparations or medications?

It is advisable to avoid drugs that can affect the functions of your platelets, such as non-steroidal anti-inflammatory drugs (NSAIDs) and anti-platelet drugs like ibuprofen, clopidogrel, and aspirin. Medications that interfere with the process of blood clotting such as heparin, rivaroxaban, and warfarin should also be avoided.
..

If the administration of these drugs is necessary before or after any test or procedure, our doctor will assess whether to continue the medication or recommend an alternative approach.
..

You are also advised to inform our doctor before you start using over-the-counter medicines, including herbal supplements.
..

When should I seek help?

Patients with Immune Thrombocytopenia should seek immediate medical attention in the following circumstances:

Disclaimer:
The information on the Centre For Clinical Haematology website is intended for educational use.  It should not be considered or used as a substitute for medical advice, diagnosis or treatment from a qualified health professional.